How to Ban Guns: A step by step, long term process 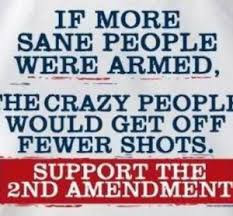 Brought to you by that impartial site Daily Kos.

It's nice that we're finally talking about gun control. It's very sad that it took such a terrible tragedy to talk about it, but I'm glad the conversation is happening. I hear a lot about assault weapon and large magazine bans, and whilst I'm supportive of that, it won't solve the problem. The vast majority of firearm deaths occur with handguns. Only about 5% of people killed by guns are killed by guns which would be banned in any foreseeable AWB.

Furthermore, there seems to be no talk about high powered rifles. What gun nuts don't want you to know is many target and hunting rifles are chambered in the same round (.223/5.56mm) that Lanza's assault weapon was. Even more guns are chambered for more powerful rounds, like the .30-06 or (my personal "favorite") 7.62x54R. Even a .22, the smallest round manufactured on a large scale, can kill easily. In fact, some say the .22 kills more people than any other round out there.

Again, I like that we're talking about assault weapons, machine guns, and high capacity clips. But it only takes one bullet out of one gun to kill a person. Remember the beltway sniper back in 2002? The one who killed a dozen odd people? Even though he used a bushmaster assault rifle, he only fired one round at a time before moving. He could have used literally any rifle sold in the US for his attacks.

The only way we can truly be safe and prevent further gun violence is to ban civilian ownership of all guns. That means everything. No pistols, no revolvers, no semiautomatic or automatic rifles. No bolt action. No breaking actions or falling blocks. Nothing. This is the only thing that we can possibly do to keep our children safe from both mass murder and common street violence.

Unfortunately, right now we can't. The political will is there, but the institutions are not. Honestly, this is a good thing. If we passed a law tomorrow banning all firearms, we would have massive noncompliance. What we need to do is establish the regulatory and informational institutions first. This is how we do it:


The very first thing we need is national registry.