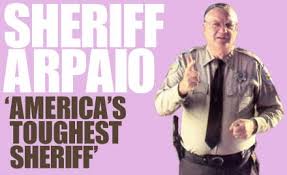 Just three weeks after I was sworn into office for a sixth term as Maricopa County Sheriff, a group of radical extremists filed a recall campaign to forcibly remove me from office.

This is very serious. These left-wing groups of agitators are the same ones who spent millions against me in last year's campaign in an effort to defeat me. Because they didn't like the outcome of that election they are now going to spend millions of dollars to force a recall election this coming fall.

So far they have raised over $1.3 million to defeat me!

These sore losers just never stop. They figure if they can force an election in an off-year they'll be able to turn out every pro-illegal immigrant voter and steal this election. We saw them do the very same thing to an Arizona State Senator just over a year ago.

It's clear that these people will go to any lengths to see me defeated and out of office. They'll resurrect all the lies, distortions and personal attacks from last year's campaign and use them against me this year.

And what is this all about really? Why do they hate me so much? It's simple: I am the only law enforcement official in this state that enforces our laws against illegal immigration. Period. Everything else they'll talk about is a deceptive smokescreen because they know they cannot win on the issue of enforcing the law.

In fact, in their statement about the recall this group claims that I don't "respect, defend or protect the rights guaranteed in the U.S. Constitution!" This, coming from the same group of people who have waged a relentless campaign against me in an effort to stop enforcing the laws! I have sworn an oath to protect and defend our United States Constitution probably more times than these clowns have pledged allegiance to our flag.

You were such an important part of my victory last year even though we faced insurmountable odds. I certainly did not plan on this recall, but I have to ask you again for your support. The fight starts now. Over the next several months I am going to be bombarded with negative attacks and lies. I must have the necessary resources to defend my record and run a winning campaign.

But I don't care what threats they make. I will never back down one inch when it comes to doing the job I was JUST elected to do. I will continue enforcing all the laws on the books no matter what the consequences.

Your contribution today is critical as we face these radical extremist forces. We cannot allow a small band of thugs to thwart the will of the voters and erode the Rule of Law.

Trust me; I never dreamed I would have to come to you for a contribution again. But it's clear that I must ask you for your support and your prayers if we are going to beat our opponents. Please click here now to make a contribution.

Thank you for everything you have done and I look forward to hearing from you soon.