Is Restoring the Articles of Confederation America’s Best Chance to Control Washington? 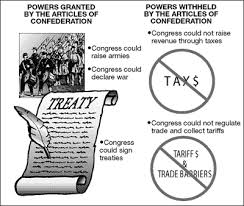 Americans demanding a return to limited government, a balanced budget and an end to spiraling sovereign debt have been voting for the GOP for decades and the result has been total failure on all counts. To accomplish these goals we really must turn the government structure back to our first government model, the Articles of Confederation, so the centers of real power are at the state rather than the federal level. Since 1913, it has been very easy, between maintaining the two-party monopoly and buying off Congress, for the power elite to control leviathan from the top down. This would be far more difficult if power, authority and programs were decentralized and returned to control of the individual states.

Changing the government does not mean voting in another president or changing whether the Democrats or GOP control the House or Senate. Both parties are equally guilty and responsible for the downfall of America. Yes, I would certainly prefer Rand Paul to another Democrat president following the second term of Barak Obama. And of course more liberty-oriented state house representatives as well as senators and congress members at the federal level would help to get the liberty message out.

But national politics today is like "window dressing" on the Titanic and electing a "few more good politicians" will never create a majority on most important issues. The political leadership knows we are sinking and have reserved the lifeboats for themselves. All of the electioneering and mindless political chatter is about as relevant as deciding who would pay the final bar tab on the Titanic. Politics is just a subterfuge to keep you in the bar while the elites rush aboard the lifeboats.

A Short History of the Articles