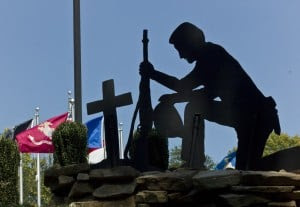 Another veterans memorial is under attack.

Last week, Liberty Institute filed a motion on behalf of The American Legion and The American Legion Post 290 of King, N.C., seeking to have these veterans organizations included in a pending lawsuit over the constitutionality of a veterans memorial in King’s Central Park.

In 2009, the local Legion Post 209 donated half of the funds, and contributed to the design of a veterans memorial that includes a statue of a soldier kneeling before a cross-shaped headstone. Each year, The American Legion participates in patriotic Memorial Day and 9-11 events at the site.

In 2012, Americans United for Separation of Church and State, which claims it is “dedicated to preserving the principle of church-state separation,” filed a lawsuit against the city of King on behalf of resident Steven Hewett. The group alleges the statue violates the U.S. and North Carolina constitutions because it contains religious imagery and sits on public land.