Walter Jones speaks for many 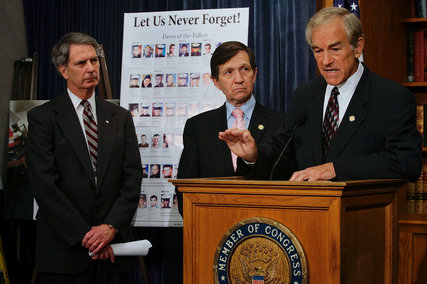 Though some anti-war activists may say it is too little too late while others are saying better late than never – all in response to comments this past weekend by Rep. Walter Jones (R-District 3) – we know that our Representative in the U.S. House had his transformation years ago. However, no matter how he is viewed by the public, you can be sure the more conservative branch of the GOP is angered.


The Huffington Post reports that Jones, speaking at a Young Americans for Liberty conference in Raleigh on Sunday, said that former Vice President Dick Cheney would probably end up in hell for the Iraq War. “Congress will not hold anyone to blame. Lyndon Johnsonʼs probably rotting in hell right now because of the Vietnam War, and he probably needs to move over for Dick Cheney,” Jones said.

The YAL is a group that was formed during former Rep. Ron Paulʼs (R-Texas) 2008 presidential campaign. Jones credited Paul for helping him understand, “if youʼre ever going to send young men and women to die, it needs to be with the Constitution and debated by the Congress.” He also called the U.S. the drone policy “absolutely unconstitutional.” “When that drone comes to America from a foreign country, weʼre going to wonder what in the hell hit us,” he said.

True, Rep. Jones did come to condemn the wars in Iraq and Afghanistan after voting to invade in 2003, but since he came to his current understanding, he has been both unwavering and unapologetic – all while constantly supporting our military.

We applaud his honesty.
Posted by Brock Townsend at Wednesday, February 27, 2013