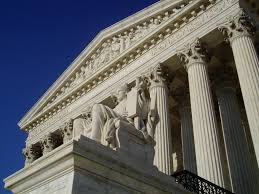 The Supreme Court on Wednesday appeared likely to strike down a key part of the Voting Rights Act, the landmark civil rights law designed to protect minority voters from discrimination.

The court’s conservative justices were at times hostile to the law’s requirement that states with a history of discrimination gain “preclearance” from the federal government before changing their voting procedures.

Justice Antonin Scalia called the policy an example of “racial entitlement” — a comment that seemed to strike a nerve with Justice Sonia Sotomayor, underscoring the delicate racial politics at play in the case.

Democratic lawmakers, civil rights leaders and hundreds of activists rallied outside the court Wednesday, arguing that the Voting Rights Act is still a necessary tool to fight discrimination. Some lawmakers had to duck out of the arguments halfway through in order to help unveil a statue of Rosa Parks across the street in the Capitol.

“I am proud to stand with my colleagues today to send a clear message to the public and to the court that the right to vote is not a matter of race, entitlement or partisanship,” said Rep. Marcia Fudge (D-Ohio), the chairwoman of the Congressional Black Caucus.

But inside the court’s chambers, lawyers arguing in favor of the Voting Rights Act clearly struggled to convince skeptical conservatives that the preclearance requirements are still needed.