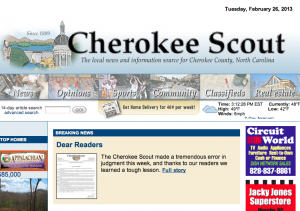 An uproar over a Western North Carolina editor’s request for a list of concealed-carry gun permits led to the editor withdrawing his request, and resigning from the weekly mountain paper.

Robert Horne, the editor of the weekly Cherokee Scout since 2005, resigned from his position Tuesday, following the backlash over public records request he made to Cherokee Sheriff Keith Lovin for a list of residents who hold concealed-carry permits. He plans on working through May, and then leaving the state.

Cherokee County is located in the mountainous,  westernmost corner of the state.

Horne has asked for a list of concealed-carry gun permits on Feb. 19, but Lovin denied it and then posted a response from Horne about how the information should be public on the sheriff’s Facebook page, which sparked a deluge of comments critical of the editor, according to this account from the Columbia Journalism Review.

Threats to newspaper staffers and Horne started coming in, with Horne reporting several of the threats to the same sheriff’s office.

(The permits are, despite Lovin’s conclusion, considered public records, though legislation introduced this year seeks to make the information confidential.)

Scout’s publisher, David Brown, issued an apology this week to readers about Horne’s request, calling it a “tremendous error” to ask for the records.  Brown turned down a request for comment, saying the paper’s owners, Community Newspapers Inc., in Georgia, asked him not to talk about the situation.

Both the Columbia Journalism Review and national media commentator Jim Romenesko have been following the story, with their takes on the situation here and here.

From the CJR article: