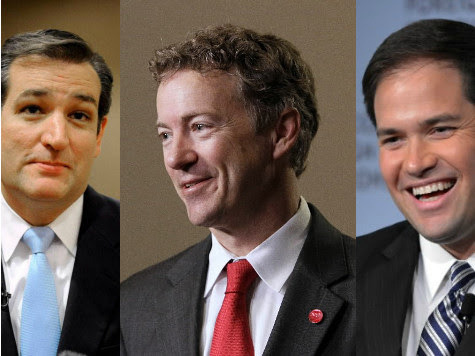 "John McCain may have finally lost it.  In an interview with Huffington Post he referred to Sen. Rand Paul (R-KY) and Sen. Ted Cruz (R-TX) as "wacko birds."

“They were elected, nobody believes that there was a corrupt election, anything else,” McCain said. “But I also think that when, you know, it’s always the wacko birds on right and left that get the media megaphone." Asked to clarify, McCain said he was referencing ”Rand Paul, Cruz, Amash, whoever.”
Maybe McCain is angry because Paul and Cruz stole the headlines from his and BFF Lindsay Graham's kumbaya "My Dinner With Barack" moment on Wednesday. Maybe he still blames those crazy Sarah Palin conservatives who kept him out of the White House (you know that's what he really believes in his heart... you just KNOW it,) or maybe he is just jealous that a fellow Senator can actually stand, talk and refrain from urinating for over 12 hours, let alone 12 minutes.
Either way, McCain is single-handedly giving the media the exact narrative they need to attack conservatives' newest hero.  He is also inviting a robust primary challenge for his bid to get re-elected to the US Senate in 2016 for the 31st year.
More @ Breitbart
Posted by Brock Townsend at Saturday, March 09, 2013