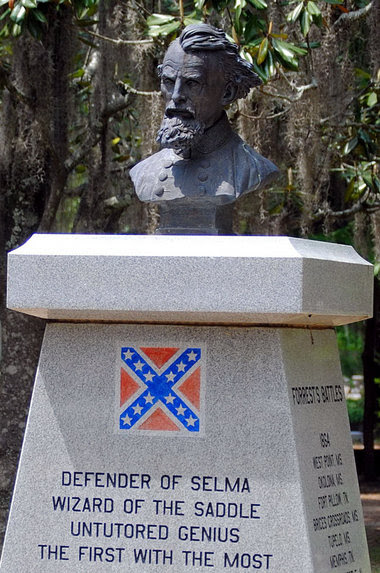 Old article below stating the same old lie that  "........served as a Grand Wizard in the Klu Klux Klan."

More than two weeks after it was first reported missing, the bust from the Nathan Bedford Forrest statue in Live Oak Cemetery is still missing. But now, supporters of the monument are putting plenty of money behind their efforts to both find the bust and those responsible for its theft.

Tuesday, The Friends of Forrest, the group that originally funded the monument’s creation in 2000, announced a $20,000 reward for information leading to the “arrest and conviction of the person or persons responsible for this crime.”

“Understanding that the history and heritage of the many people groups who make up the state of Alabama are intertwined to form the common bonds of the people of Alabama, it is the belief of the Friends of Forrest that all history must be preserved and protected for future generations,” the organization said in a press release Tuesday.

“The Friends of Forrest strongly condemn this attack and call for all persons to stand against any attack on our common history, its monuments or memorials.