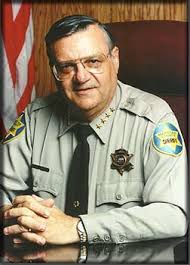 It looks like “America’s toughest sheriff” was the intended victim of a mailbomb attack:

Authorities are investigating an explosive device addressed to Arizona’s Sheriff Joe Arpaio, the self-proclaimed “toughest sheriff in America” known for his tough treatment of jail inmates and cracking down on illegal immigrants.

The device intercepted in Flagstaff late Thursday was in a package addressed to Arpaio at his downtown Phoenix office, Arpaio’s office said in a statement.

It appeared suspicious, so it was X-rayed and the device was detected. A bomb squad team neutralized the explosive, the statement said.

Arpaio’s chief deputy, Jerry Sheridan, told The Arizona Republic that investigators believe the package was picked up on Thursday at a rural Post Office box. Flagstaff is about 140 miles north of Phoenix.