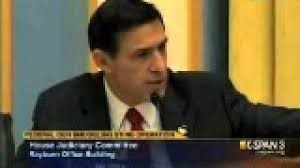 I understand Issa hates his guts and rightly so.
Wonder how many times Holder has lied so far?

Eric Holder lashed out at his chief antagonist Wednesday at a congressional hearing where the attorney general was questioned on recent administration scandals, telling Republican Rep. Darrell Issa at the end of a tense exchange that his conduct is "shameful."

Holder’s comments came after Issa accused him of purposely and repeatedly keeping information from Congress.

“No, that’s what you typically do,” Holder responded. Following crosstalk, Holder added, “That is inappropriate and is too consistent with the way in which you conduct yourself as a member of Congress. It’s unacceptable and it’s shameful.”

The heated exchange with the lawmaker who led the charge against Holder regarding the botched Operation Fast and Furious came during a House Judiciary Committee hearing that examined a new set of scandals. Holder was grilled on a series of allegations, including the way the agency tried to find out who was behind a government leak to The Associated Press.