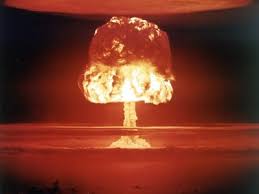 President Barack Obama is set to announce a new round of strategic nuclear warhead reductions in the near future as part of a disarmament agenda that could reduce U.S. strategic warheads to as few as 1,000 weapons.

The next round of U.S.-Russian arms talks would follow Obama's expected announcement that the United States' arsenal of strategic warheads can be reduced unilaterally to around 1,000 warheads. That position is expected as part of the Pentagon's long-delayed Nuclear Posture Review implementation study that Obama was expected to sign earlier this year.

Recent press reports have indicated that President Obama may make the cuts -- fully one-third of the nation's arsenal -- by executive action and without Congressional authorization.

Specialists on nuclear deterrence say further cuts beyond the 1,550 deployed warheads mandated by the 2010 New START arms treaty could undermine the United States' ability to deter nuclear powers like Russia and China, who have significant modernization programs for their nuclear arsenals underway.

Further cuts also are likely to embolden other non-nuclear states, including Japan, to consider building their own nuclear arsenals, analysts say.

Retired Air Force Lt. Gen. Thomas McInerney said the administration is seeking to unilaterally disarm U.S. nuclear forces, something that is "the most dangerous thing I have ever seen an American president attempt to do."

"This is not the time to embark on such a dangerous path, with China, Russia, Iran, and North Korea increasing their nuclear forces," he said.