A Man Is Punctual: The Importance of Being on Time 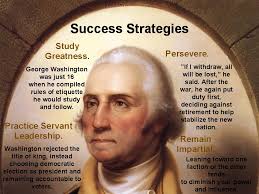 The life of George Washington was characterized by a scrupulous regard for punctuality.

When he asked a man to bring by some horses he was interested in buying at five in the morning, and the man arrived fifteen minutes late, he was told by the stable groom that the general had been waiting there at five, but had now moved on to other business, and that he wouldn’t be able to examine the horses again until the following week.

When he told Congress that he’d meet with them at noon, he could almost always be found striding into the chamber just as the clock was striking twelve.

Washington’s promptness extended to his mealtimes as well. He ate dinner each day at exactly 4 o’clock, and when he invited members of Congress to dine with him, and they arrived late, they were often surprised to find the president halfway done with his meal or even pushing back from the table.

To his startled, tardy guest he would say, “We are punctual here. My cook never asks whether the company has arrived, but whether the hour has come.”

And when Washington’s secretary arrived late to a meeting, and blamed his watch for his tardiness, Washington quietly replied, “Then you must get another watch, or I another secretary.”


More @ The Art of Manliness
Posted by Brock Townsend at Saturday, June 01, 2013