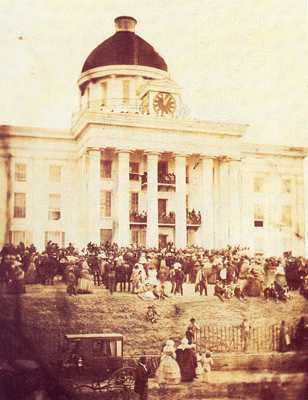 It's worse, a lot worse if the following is true and the dots connect.  Remember, their Totalitarian Authoritarian System is based on Criminal Fraud.
Constitution ended in 1861 according to Senate Report 93-549 (93rd Congress, 1st Session, 1973):

When the Southern states walked out of Congress on March 27, 1861, the quorum to conduct business under the Constitution was lost. The only votes that Congress could lawfully take, under Parliamentary Law, were those to set the time to reconvene, take a vote to get a quorum, and vote to adjourn and set a date, time, and place to reconvene at a later time, but instead, Congress abandoned the House and Senate without setting a date to reconvene. Under the parliamentary law of Congress, when this happened, Congress became sine die (pronounced see-na dee-a; literally “without day”) and thus when Congress adjourned sine die, it ceased to exist as a lawful deliberative body, and the only lawful, constitutional power that could declare war was no longer lawful, or in session.
The Southern states, by virtue of their secession from the Union, also ceased to exist sine die, and some state legislatures in the Northern bloc also adjourned sine die, and thus, all the states which were parties to creating the Constitution ceased to exist. President Lincoln executed the first executive order written by any President on April 15, 1861, Executive Order 1, and the nation has been ruled by the President under executive order ever since. When Congress eventually did reconvene, it was reconvened under the military authority of the Commander-in-Chief and not by Rules of Order for Parliamentary bodies or by Constitutional Law; placing the American people under martial rule ever since that national emergency declared by President Lincoln. The Constitution for the United States of America temporarily ceased to be the law of the land, and the President, Congress, and the Courts unlawfully presumed that they were free to remake the nation in their own image, whereas, lawfully, no constitutional provisions were in place which afforded power to any of the actions which were taken which presumed to place the nation under the new form of control.
President Lincoln knew that he had no authority to issue any executive order, and thus he commissioned General Orders No. 100 (April 24, 1863) as a special field code to govern his actions under martial law and which justified the seizure of power, which extended the laws of the District of Columbia, and which fictionally implemented the provisions of Article I, Section 8, Clauses 17-18 of the Constitution beyond the boundaries of Washington, D.C. and into the several states. General Orders No. 100, also called the Lieber Instructions and the Lieber Code, extended The Laws of War and International Law onto American soil, and the United States government became the presumed conqueror of the people and the land.
Martial rule was kept secret and has never ended, the nation has been ruled under Military Law by the Commander of Chief of that military; the President, under his assumed executive powers and according to his executive orders. Constitutional law under the original Constitution is enforced only as a matter of keeping the public peace under the provisions of General Orders No. 100 under martial rule. Under Martial Law, title is a mere fiction, since all property belongs to the military except for that property which the Commander-in-Chief may, in his benevolence, exempt from taxation and seizure and upon which he allows the enemy to reside.
President Lincoln was assassinated before he could complete plans for reestablishing constitutional government in the Southern States and end the martial rule by executive order, and the 14th Article in Amendment to the Constitution created a new citizenship status for the new expanded jurisdiction. New laws for the District of Columbia were established and passed by Congress in 1871, supplanting those established Feb. 27, 1801 and May 3, 1802. The District of Columbia was re-incorporated in 1872, and all states in the Union were reformed as Franchisees of the Federal Corporation so that a new Union of the United States could be created. The key to when the states became Federal Franchisees is related to the date when such states enacted the Field Code in law. The Field Code was a codification of the common law that was adopted first by New York and then by California in 1872, and shortly afterwards the Lieber Code was used to bring the United States into the 1874 Brussels Conference and into the Hague Conventions of 1899 and 1907.
In 1917, the Trading with the Enemy Act (Public Law 65-91, 65th Congress, Session I, Chapters 105, 106, October 6, 1917) was passed and which defined, regulated and punished trading with enemies, who were then required by that act to be licensed by the government to do business. The National Banking System Act (Public Law 73-1, 73rd Congress, Session I, Chapter 1, March 9, 1933), Executive Proclamation 2038 (March 6, 1933), Executive Proclamation 2039 (March 9, 1933), and Executive Orders 6073, 6102, 6111 and 6260 prove that in 1933, the United States Government formed under the executive privilege of the original martial rule went bankrupt, and a new state of national emergency was declared under which United States citizens were named as the enemy to the government and the banking system as per the provisions of the Trading with the Enemy Act. The legal system provided for in the Constitution was formally changed in 1938 through the Supreme Court decision in the case of Erie Railroad Co. v. Tompkins, 304 US 64, 82 L.Ed. 1188.
On April 25, 1938, the Supreme Court overturned the standing precedents of the prior 150 years concerning “COMMON LAW” in the federal government.
THERE IS NO FEDERAL COMMON LAW, AND CONGRESS HAS NO POWER TO DECLARE SUBSTANTIVE RULES OF COMMON LAW applicable IN A STATE, WHETHER they be LOCAL or GENERAL in their nature, be they COMMERCIAL LAW or a part of LAW OF TORTS.” (See: ERIE RAILROAD CO. vs. THOMPKINS, 304 U.S. 64, 82 L. Ed. 1188)
Posted by Brock Townsend at Wednesday, June 12, 2013