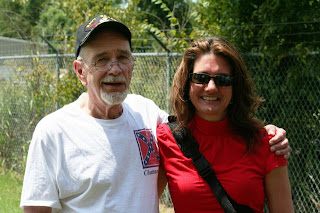 When the Virginia Flaggers were formed, almost two years ago, I came to know of PoP Aaron when Billy Bearden suggested I write him and tell him about what I was up to.  PoP published my story as "Virginia Belle Needs Help"...

...and word quickly spread through the Heritage community.   Thanks in large part to his help, what began as one woman taking a stand has now grown into a nationally recognized organization, with hundreds having joined us in our efforts, and hundreds more lending their support.

I was very grateful for his support, but as I got to know PoP, found that the real treasure was in the friendship that blossomed with this most dedicated warrior.

Certainly, his record of standing against those who would attack our Heritage speaks for itself.  For years, he has been a tireless fighter, working mostly behind the scenes and without recognition, which if you knew PoP, was pretty much how he wanted it.

Having recently lost my own Father,  PoP became a surrogate father to me.  He was my mentor, teacher, and spiritual counselor.  PoP had the kind of Faith...simple and unwavering...that I pray others see in me.  Throughout his illness, he told me on many occasions that he was quite ready to see his Savior...but would like just a little more time to put a  few more scalawags, traitors, and Southern Heritage haters in their place...if the good Lord saw fit.