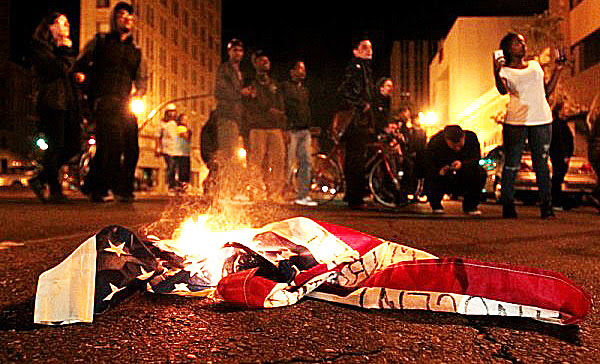 A conservative filmmaker and journalist says he was pummeled and “mowed to the ground” by an angry mob Sunday night in Oakland, Calif., during a protest of George Zimmerman’s acquittal in the Florida death of Trayvon Martin.

“I have interviews and I have footage of [Trayvon protestors] chanting ‘no justice, no peace – f— you pigs in your sleep,’” the beating victim, Christian Hartsock, told the Daily Caller. “One of them was an elementary schooler chanting with his mom.”

Hartsock initially arrived at 9:30 p.m. Pacific time to film the rally, but shortly afterward, he was told by two men to leave the public area.

Upon his refusal, the men allegedly became belligerent.

“After retreating to a corner to catch B-roll, two young men approached me and interrogated me as to what I was doing there,” Hartsock said. “I advised them I was just there to see what was going on.

They told me to get out. I asked why, which only afforded more threats. I declined their request to leave, they continued marching.”

He continued, “The two young men came back up to me and told me to leave. I told them ‘no’ and asked them what their issue was. Then other ralliers, noticing the two young men’s belligerence toward me, assumed I must have been up to something, so they began to approach me too and ask me what my problem was. I explained that I didn’t have a problem and didn’t know why I was being suddenly questioned. Within seconds there was an entire circle around me, threats being leveled from every direction.