Every six months you are mandated to get a Threat Awareness and Reporting Procedures Brief. It used to be very much like how to … spot the Iraqi contractor who is pacing off your base.

Now it is, “Look at the person at your left and right. Are they espousing social beliefs that don’t line up with Army values? What websites do they go to at work?” With the caveat that it is OK to have political beliefs that are different. You get a heavy-handed feeling.


Don’t despair yet my friends - - our saviors are in the wings.
“There are people who I only know as screen names but I have put my career in their hands.” One member tells all. 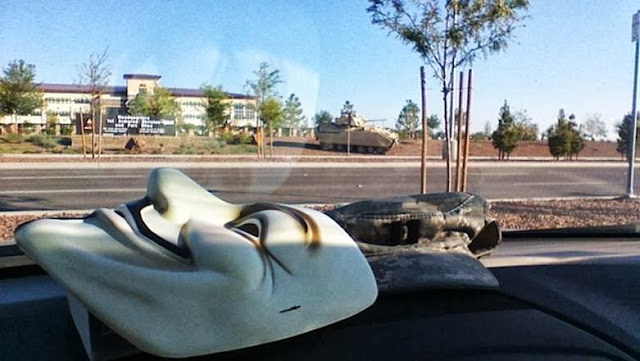 A Guy Fawkes mask on the dashboard is just one way this Army captain tips off other soldiers that he’s a fellow member of Anonymous.
An active-duty Army captain and member of Anonymous describes how the organization operates, his own involvement in the Arab Spring, how the crackdown on Bradley Manning and Edward Snowden has affected soldiers, and how more leaks are on the way.
He has agreed to speak with BuzzFeed on the condition of anonymity.
Are there a lot of members of Anonymous in the Army?

There are more than you would think, more heavily in the techie world [of the military] — especially at Fort Huachuca, where all the intel people are. A lot of them wanted to get the job [there] because they want to learn secret stuff and have a better personal understanding of how the world actually works.
How do you know who is in Anonymous?
More @ Charleston Voice
Posted by Brock Townsend at Tuesday, August 13, 2013