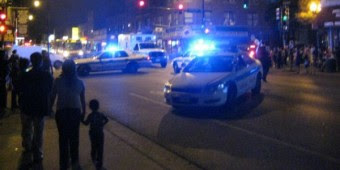 A Chicago police officer is hospitalized in serious condition with a fractured skull, a victim of black mob violence.

The as-of-yet unidentified officer was responding to a call early Saturday morning when he found dozens of people in the street, creating mayhem. He immediately called for backup, but instead of waiting for reinforcements, went to the assistance of a woman under attack.

The mob turned on him: He was struck on the head with the bat.

“No one tried to help him or stop the attack,” said one Chicago police officer. “That happens a lot:

Mob violence. No assistance. If anything, most of the people are either participating or encouraging the violence. Not trying to help.”

What the stories do not report is more important, say two Chicago police officers: The crowd was black, missing from all the news reports.

“Maybe the paper did not know,” said one of the officers. “Or maybe they did not think it was important to note that fact because it happens all the time. Or maybe, as usual, Chicago media does an awful job of reporting racial violence. Never reporting it because they think that would be racist.”

If the police on the beat are restrained from talking about the incident in public, the police blog Second City Cop is not.

The popular website marveled at the naïveté of the Chicago Tribune for reporting: “It’s not clear if the officer was hit on purpose or accidentally while trying to break up the fight.”