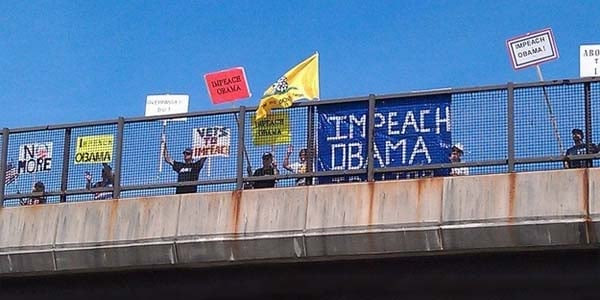 The rapidly expanding grassroots effort to impeach President Obama is now turning its sights on the Million Muslim March planned for Sept. 11.

Although now, the march has undergone a public-relations makeover and the organizers, the American Muslim Political Action Committee (AMPAC), have changed its name to “Million American March Against Fear.”

AMPAC claims,” Many non-Muslim Americans are terrified of Muslims, who are portrayed by Hollywood and the U.S. media as fanatical terrorists. Muslims, too, live in fear – of being dragged off in the night to Guantanamo and tortured, simply for the crime of being Muslim in the wrong place at the wrong time.”

What bothers James Neighbors, the founder of Overpasses for Obama’s Impeachment, is AMPAC is choosing to make its statement on the very day fanatical Muslim terrorists did indeed kill some 3,000 Americans, on Sept. 11, twelve years ago.

“We simply could not tolerate 9/11 being hijacked like that. It seems like a lot of people like to hijack things in this country, like Obama tries to hijack the word patriot for his progressives,” he added.