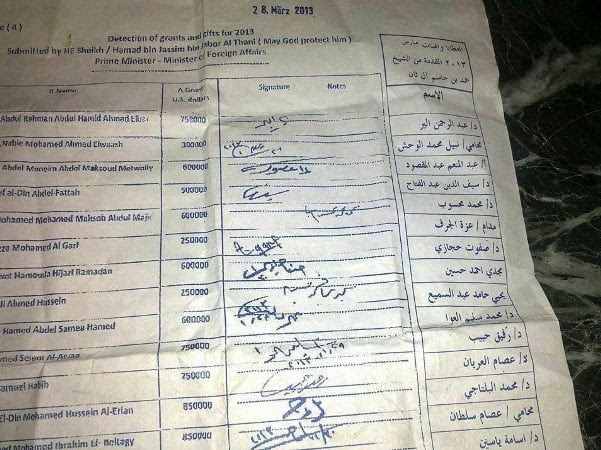 A  question apparently being raised in next week’s trial in Cairo of Egyptian Muslim Brotherhood leaders facing criminal charges is this: Was the Obama administration paying bribes as large as $850,000 a year to the Morsi government that were distributed by top ministerial level officials to Muslim Brotherhood leaders, with the direct involvement of the U.S. Embassy in Cairo?

WND is in possession of an official document from inside the Morsi government that lends credibility to a report published in Arabic by an Egyptian newspaper in Cairo that lists the charges brought by the current military-controlled government against Egyptian Muslim Brotherhood leaders.

The document was seized from Egyptian government offices in Cairo when the Morsi government was deposed by the military July 3.

As translated by former PLO member and native Arabic-speaker Walid Shoebat, the monthly “gifts” listed in the document amount to bribes paid by the Morsi government to leading Muslim Brotherhood members in Egypt, including an annual payment of $750,000 to $850,000 in U.S. dollars.