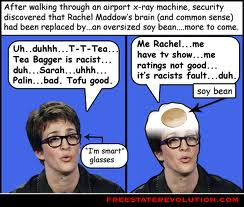 Rachel Maddow has joined in in the left-leaning-media boycott of calling the Washington Redskins by its official name, instead awkwardly referring to the team as the “R-Word” throughout a recent segment. The MSNBC host called the actual name of the team “painfully racist.”

Maddow picked up on Samoan congressional delegate Eni Faleomavaega’s practice of referring to the team as the “R-Word.” (Faleomavaega has been on the forefront of the push to force the team to change its name.)

Maddow also referred to the Redskins as the “Washington R-Word NFL team,” the “Washington, D.C., football team,” and once as “the Washington Why-Don’t-They-Change-Their-Names.” She praised Slate, The New Republic, and Mother Jones for representing “real progress” in their vow to no longer use the Redskins name.