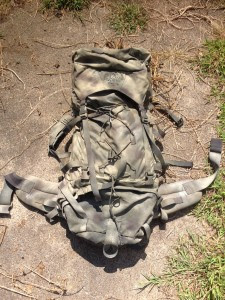 So lets say for the sake of argument that you’ve got some gear that serves you well day to day but you have either decided that it needs a more tactical flair. That’s  what my situation was. I have a great Lowe Alpine backpack that I’ve had since high school. It’s a good pack and is in good shape. The only problem is that it’s bright blue. That’s hardly a “tactical” color. That’s not to say that there is anything wrong with a blue backpack but for my purposes as a firearms instructor and tactical blog writer, it was less than desirable.

There are lots of pieces of civilian gear that are well suited for military or tactical use. For some reason, people seem to have a need to buy tactical gear with Molle webbing all over it, that they never use.Have you ever carried a military issue ALICE pack over long distances? They can be very uncomfortable to carry unless you spend a bunch of money on upgrades from Tactical Tailor. Civilian packs on the other hand tend to be heavy on comfort, heavy on cargo space and light on weight. They are lacking on so called tactical features but as long as you’ve got somewhere to put your water, you’re good in my book. You will most likely be wearing some manner of load bearing equipment anyway.