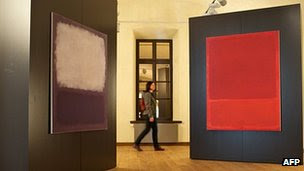 A New York art dealer has pleaded guilty to being involved in a 15 year multi-million dollar art fraud.

The paintings were said to be never-before-exhibited and previously unknown works of art by artists including Jackson Pollock and Mark Rothko.

They were sold to unsuspecting buyers for more than $80m (£50m).

She admitted in court that the works of art "were actually fakes created by an individual residing in Queens''.

The artist who painted the fakes, 73-year-old Pei-Shen Qian, won't be charged and has returned to his native China, prosecutors said.