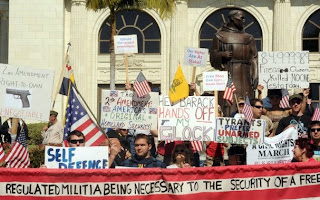 Ratchet it on up.

The year has shown monumental efforts by some to get back to the Constitution. An ever-growing portion of the largely distracted public is finally awakening to the fact that they are losing freedom and that both parties are responsible. Let us review those monumental moments of 2013 each of which have been covered extensively by us in previous columns.

We began the year with what was called “successionitis”—a desire of some of the people to leave the Union—not seen in the United States since the Civil War. Fifteen states posted over 25,000 signatures with Texas posting 116,000 by itself. The President closed down his site to further counting. With his refusal to allow further counting and the establishment media’s refusal to continue coverage, the issue was squelched. Discontent with the federal government not following the Constitution and the resultant loss of freedom (especially cited were NDAA and TSA) were said to be the reasons for the backlash by those participating.

This was followed by the 2013 Sheriffs’ Rebellion wherein by mid-February, 336 elected county sheriffs had signed pledges that they will not enforce any unconstitutional gun control laws or executive orders—seventeen of them in California. Nine states refused to comply.