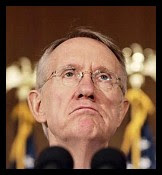 Senate Majority Leader Harry Reid (D-Nev.) on Sunday said he was not currently considering an elimination of the filibuster for legislation, but he warned that the country could not remain “paralyzed” by Republican obstruction.

Reid and the Senate Democratic majority enraged the GOP last year by moving to cut off the filibuster for most presidential appointees and judicial nominations. They left in place a 60-vote threshold for legislation. But in a rare Sunday television interview, Reid stopped short of categorically ruling out such a move in the future.