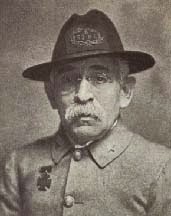 Private Leon was a Jew who served in Company B, 53rd NC. My great grandfather and great uncle served in Company C. Many years ago I was advertising in the Confederate Veteran for information concerning this regiment, and I was sent Private Leon's diary by a gentleman in NC. I, in turn, sent it from California back to NC for Mr. Weymouth Jordan in the Division of Archives and History. He replied stating that he had never seen such, and after reading it over the weekend was certain he would use it. Fortunately, it was just in time to be included in Volume XIII, NC Troops published in 1993, and Private Leon is quoted extensively. Mr. Jordan also included some of the information I provided concerning my family.

"When I commenced this diary, of my life as a Confederate soldier I was full of hope for the speedy termination of the War, and our independence.

I was not quite nineteen years old. I am now twenty-three. The four years that I have given to my country, I do not regret, nor am I sorry for one day that I have given - my only regret is that we have lost that for which we fought. Nor do I for one minute think that we lost it by any other way than by being outnumbered at least five, if not ten to one. The world was open to the enemy, but shut out to us. I shall now close this diary in sorrow, but to the last I will say that, although but a private, I still say our Cause was just, nor do I regret one thing that I have done to cripple the North."

A German immigrant of the Jewish faith, Private Louis Leon was not unusual as a Confederate soldier from North Carolina.  Captain Cornehlson raised the German Volunteers in Wilmington in 1861, which became Company A of the Eighteenth North Carolina.  Of the 102 men in Company A, every officer and every enlisted man but 30 had been born in Germany and volunteered to fight to defend North Carolina and the Southern Confederacy.

“Lewis Leon, a well-known resident of Wilmington and a veteran of Confederate States service, was born in Mecklenburg, Germany, November 27, 1841.  Three years later he was brought by his parents to New York City, whence he moved to Charlotte in 1858, and engaged in mercantile pursuits as a clerk.  Becoming a member of the Charlotte Grays, he entered the active service of that command, going to the camp of instruction at Raleigh on April 21, 1861.

The Gray’s were assigned to Col. D.H. Hill’s regiment, the First, as Company C, and took part in the Battle of Big Bethel, in which Private Leon was a participant.  At the expiration of the six months’ enlistment of the Bethel Regiment, he reenlisted in Company B [of] Capt. Harvey White, of the Fifty-first Regiment, commanded by Col. William Owen.

He shared the service of this regiment in its subsequent honorable career, fighting at Gettysburg, Bristow Station, Mine Run, and the Wilderness, receiving a slight wound at Gettysburg but not allowing it to interfere with his duty. During the larger part of his service he was a sharpshooter.

On the 5th or 6th of May, 1864, the sharpshooters of his regiment were much annoyed by one of the Federal sharpshooters who had a long range rifle and who had climbed up a tall tree, from which he could pick off the men, though sheltered by stumps and stones, himself out of range of their guns.

Private Leon concluded that “this thing had to be stopped,” and taking advantage of every knoll, hollow and stump, he crawled near enough for his rifle to reach, and took a “pop” at this disturber of the peace, who came tumbling down.  Upon running up to his victim, Leon discovered him to be a Canadian Indian, and clutching his scalp lock, he dragged him back to the Confederate line.

At the Battle of the Wilderness he was captured, and from that time until June, 1865, he was a prisoner of war at Point Lookout and Elmira, N.Y.  Upon being paroled he visited his parents in New York City, and then worked his way back to North Carolina.

He is warmly regarded by his comrades of Cape Fear Camp, U.C.V., and has served several terms as its adjutant. When Col. James T. Morehead prepared a sketch of his regiment, the Fifty-third, Private Leon furnished him with a copy of a diary which he had kept from the organization of the regiment up to the 5th of May, 1864, when he was captured.