Via comment by Anonymous on July 28 1943: British bomb Hamburg with incendiary.. 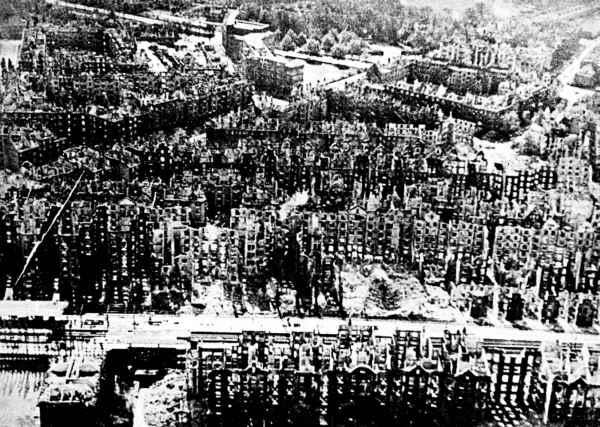 'Of the children these dreadful nights, what can be said? Their fright became horror and then panic when their tiny minds became capable of grasping the fact that their parents could no longer help them in their distress. They lost their reason and an overwhelming terror took over. Their world had become the shrieking centre of an erupting volcano from which there could be no physical escape. Nothing that hell offered could be feared more.

'By the hand of man they became creatures, human in form but not in mind. Strangled noises hissed from them as they staggered pitifully through the streets in which tar and asphalt ran as streams. Some of these tiny creatures ran several hundred feet. Others managed only twenty, maybe ten feet. Their shoes caught fire and then their feet. The lower parts of their legs became flickering sticks of flame. Here were Joans of Arcs... thousands of them.

All who had perished unjustly on the fires of the Middle Ages were as nothing when compared with what was happening that night. 'The sounds of many were unintelligible and undoubtedly many more called for their parents from whom they were parted by death or by accident. They grasped their tortured limbs, their tiny burning legs until they were no longer able to stand or run. And then they would crash to the ground where they would writhe in the bubbling tar until death released them from their physical misery.'