The Publicly Broadcast Hate Speech Against the Confederate Flag 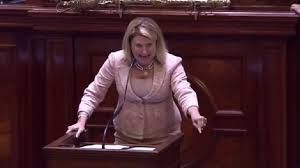 When I initially decided to express an online and public position regarding the Confederate Flag I also realized I would need to try and be patient and tactful. Setting a good example and providing people with a well presented argument is usually an effective way to advocate. However I've never particularly been interested in winning popularity contests, so I also employ several agitating and flamboyant styles of advocacy. While my topics and opinions are usually grounded in common sense; the way in which I choose to comment can either spark debate and thought or simply be agitating while proving my point.

When I saw Jenny Anderson Horne screaming that the Confederate Flag is a symbol of hate being broadcast on CTV News Regina, it didn't take long for me to decide what type of comments I would post. The following opinion is based under the Canadian Charter of Rights and Freedoms: