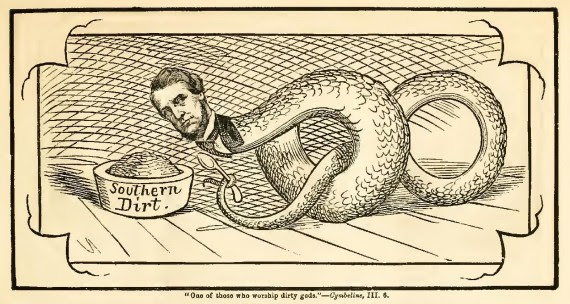 We have been taught that the North was united behind Lincoln in his war. This is simply not true. It is an outright lie told and taught by the victors of the war who, after implementing the government (“public”) schools called for by Karl Marx in his Communist Manifesto, now control education in this land.

As a Copperhead, I was recently looking at the archives on the Wisconsin Historical Society’s internet site. I found some interesting information that debunks the false history we have been taught.

By the time of Lincoln’s re-election, he had shut down (often burning down) opposition newspapers in the North, imprisoned anyone who dared to voice any opposition, or even who failed to openly support him. Anyone who opposed him and his war was labeled a poisonous, deadly, and dangerous snake – a Copperhead.

A book of cartoons was published in Philadelphia in 1863 titled Ye Book of Copperheads. It depicted those who disagreed Lincoln as dangerous copperhead snakes, as seen in this cartoon from the book of a snake being killed: