GEORGE WILL AND CHARLES KRAUTHAMMER: Don’t You Get It? You Fools Helped Create Donald Trump! 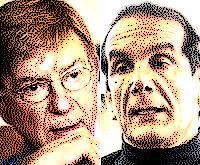 Longtime "conservative" columnists George Will and Charles Krauthammer are apoplectic about the possibility that Donald Trump may become the Republican Party's nominee for President.

Will's recent temper tantrum in print implied that the establishment should consider support for Hillary Clinton and asserted that the GOP may splinter because the party leadership didn't get its way.

Similarly, Krauthammer has been a constant critic of Trump's run, calling him a "rodeo clown" and "deeply bigoted" for his proposal to suspend Muslim immigration* until the San Bernardino terror attack can be deconstructed.