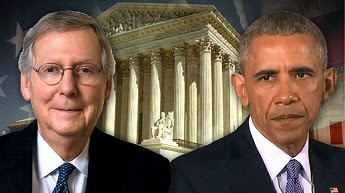 ACTION:  Contact Senator Mitch McConnell and urge him to stand strong against the media pressure.  Demand that he block any anti-gun “swing vote” from moving through the Senate and being confirmed to the Supreme Court.

Mitch McConnell is under a lot of heat from the liberal media.

But he got it right when he recently indicated that Obama's effort to snuff out the Second Amendment needs to be nipped in the bud.

No radical Supreme Court nominee to make the rounds and visit with Republican senators.

No hearings.  No floor votes.  No possibility of movement or confirmation.

Because, make no mistake about it:  If Obama gets his pick, the Second Amendment, as far as the corrupt courts are concerned, is dead.