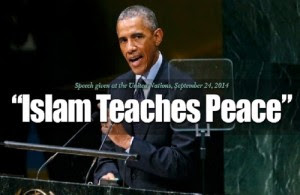 Thank you for your column. It is my belief that the puppet president has not devised a counter Islamic terrorism strategy because the Islamic terrorism is embedded within the larger, U. N. Agenda 21/2030 strategy.

Chaos, the destruction of our culture and society, and the fiscal implosion that accompanies such an assault is sacrosanct. Regarding the importation of Syrian ‘refugees’, we’re told that we can’t fully vet the massive numbers of ‘refugees’.

My perspective is that the U. N. is vetting those being imported, with the intention of importing criminals and terrorists under the veil of refugee status. This is designed to hasten the purposeful destruction of our constitutional and sovereign republic, akin to the destruction of Europe.

National Defense Authorization Act for FY16, signed last fall by President Barack Obama, requires the Secretary of State and Defense Secretary to turn over a real strategy for the Middle East and countering violent extremism no later than Feb. 15, 2016.

The White House has failed to comply.  Reacting to the the Administration’s failure to submit the strategy, Rep. Mac Thornberry, R-Texas, the Chairman of the House Armed Services Committee, made the following statement: “Unsurprisingly the Administration cannot articulate a strategy for countering violent extremists in the Middle East.  Time and again, the President has told us his strategy to defeat extremist groups like ISIS and al Qaeda is well underway; yet, months after the legal requirement was established, his Administration cannot deliver that strategy to Congress.”

“I fear the President’s failure to deliver this report says far more about the state of his strategy to defeat terrorists than any empty reassurance he may offer from the podium,” Thornberry added.


More with video @ Conservative Base
Posted by Brock Townsend at Friday, February 19, 2016