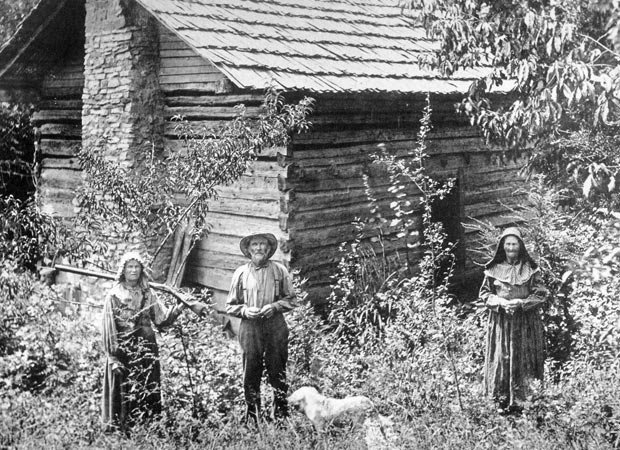 This photograph shows Mary Faust and her two children, “Coon” and “Sis.” Faust was born and raised in Anderson County, Tennessee, and this picture shows the Faust family in their cabin home near Andersonville.

The entire family, although they lived within twenty miles of Knoxville, relied entirely upon their own labor to clothe as well as feed themselves. This photo, taken in 1910, speculates that Faust may have been the oldest woman in the United States at the time. Regardless of her age, she worked from early morning till sundown each day, with the result that her two children and she were entirely clothed with cloth she wove and garments she made. In addition to her spinning and weaving she aided in cooking and household duties. None of the modern commodities of 1910 were to be found in her home, but instead her cabin maintained the same appearance as it did 100 years prior.

Faust said she was never sick nor were her children, and her old age she attributed to the simple life she led. She recalled visiting Knoxville in the early 1800s, and at that time there were only a few hundred people in the town. The trip from her home to Knoxville was made on foot and her husband traveled with her to join the band of men who left Knoxville to fight in the Mexican war. She returned alone and lived in that cabin for the remainder of her life.

Robert Gore
Bring It On