The frightening similarities between the US and French elections 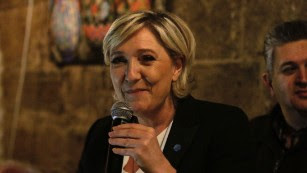 Three weeks before voters head to the polls to choose the next president of France, all 11 first-round candidates lined up in a large semicircle for a nationally televised debate that quickly dissolved into a cacophony of insults and shouts that steamed rapidly out of control.


For an American viewer, it was a Gallic clone of our own Republican primary debates a year before.
A week after this televised contest, France's leading daily newspaper, Le Monde, asked, "What would the first months of an Emmanuel Macron presidency look like?" -- effectively baptizing one of the two leading candidates the winner even before the first ballot is cast.

It appeared to be a form of wishful thinking, not unlike the broad assumptions of most American newspapers in October that Hillary Clinton was the presumptive heir to the presidency of  the United States -- not Donald Trump.
More @ CNN
Posted by Brock Townsend at Friday, April 14, 2017