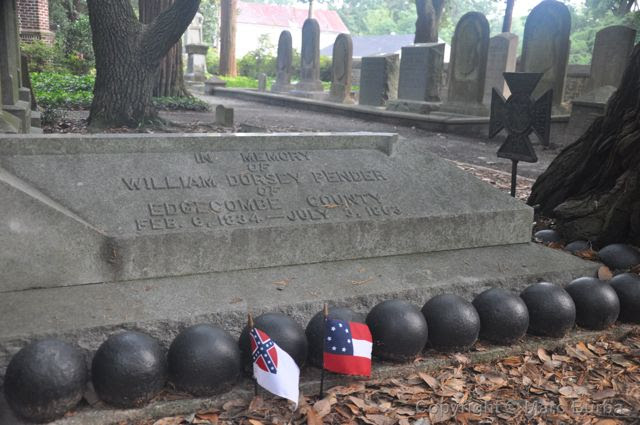 The grave of William Dorsey Pender, one of the youngest (age 29) Confederate generals in the Civil War. He was mortally wounded at Gettysburg in 1863. Tarboro

The traitors and misfits who terrorized North Carolinians during the war, called “Buffaloes,” were a by-product of the Northern invader. General Pickett and Hoke, during their attempts to liberate northeastern North Carolina in 1863-64, dealt severely with local men who aided and abetted the enemy. The Fort Branch mentioned below, was named in honor of Brigadier-General Lawrence O’Bryan Branch, a native of nearby Enfield, NC who was killed in action at Sharpsburg in mid-1862.
Bernhard Thuersam, www.Circa1865.com   The Great American Political Divide

“The Tenth North Carolina Regiment was encamped near Fort Branch (about five miles east of Hamilton on the Roanoke River), and was awaiting the Federals, in December 1864. A force of Federals . . . were known to be advancing from Plymouth, reaching the vicinity of Fort Branch in the night of December 11.

“The enemy, piloted by some buffaloes (traitors) crossed the creek below (the east) and took our troops at the bridge in the rear. We had turned off from the main road from Tarboro to Williamston in order to come in by Hamilton to reinforce from the rear our troops at Butler’s Bridge.”

The term buffaloes, commonly referred to renegade bands in eastern North Carolina, composed of armed Negroes, native Union bushwhackers, and criminally-intentioned local misfits. They preyed on the prosperous and poor alike, relying on brutality for their success.”