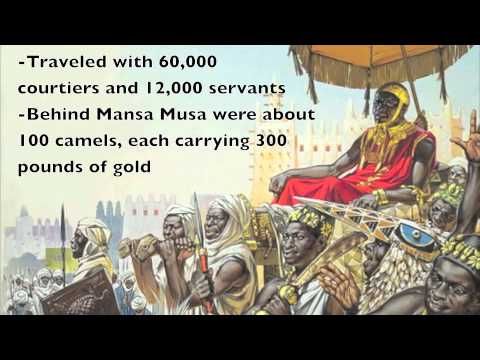 The Arab empire’s extent in ancient times was outlined by Berber wanderer Ibn Batuta who spent forty years touring countries from western China to modern-day Mali without once leaving Arab hegemony. It is recorded that in the fourteenth century, Timbuktu’s greatest ruler, Mansa Musa, arrived in Cairo with a magnificent caravan of soldiers, courtiers, wives, concubines and 12,000 slaves. A baggage train of 300 camels carried three hundred pounds of gold. By the time of the first European visits to Africa, the slave trade of native tribes and Arab had been long-established.
Bernhard Thuersam, www.Circa1865.com   The Great American Political Divide

“Beyond its attraction as a center of great wealth, no city was more worthy of discovery for geographical and scientific reasons. Arabic texts documented that merchants from Tripoli to Morocco had gathered at Timbuktu since the late thirteenth or early fourteenth centuries, when it was incorporated into the great Malian Empire, to buy gold and slaves in exchange for prized European manufactured goods, cloth, horses, and the mined salt of the desert.

[Evidence in Moroccan archives indicate] that trade had been conducted across the [Sahara] region since early times . . . [and] it seems likely that gold, animal skins, ivory, gemstones, perfumes and black slaves from the Sudan states were exchanged for the manufactures and trinkets of the Phoenician, Roman and Byzantine worlds.

Having taken their empire, the Arabs sealed it off. Foreigners who dared set foot in any part of it were confronted with a harrowing choice: either take a vow of abiding allegiance to Islam, forsaking all others loyalties, or face decapitation.

[In the Arab empire . . .] Gold and slaves were paramount. The importance of the slave trade is illustrated by estimates suggesting that from the seventh to the end of the nineteenth centuries, between 9 and 13 million slaves were transported north across the Sahara. This is comparable to the numbers shipped seaward during the four centuries of the Atlantic slave trade, though the Saharan traffic has received less public discussion.

Timbuktu grew to become an opulent city boasting real infrastructure – markets, mosques, and important Islamic libraries and schools. The wealth to fund this cultural and intellectual development was generated from the gold mines of West Africa, worked by black slaves for their black and Arab masters, and the merchants who carried their goods on camels, oxen and asses, and men’s heads, and in the canoes of tropical Africa’s rivers and lakes.

Though Africa was a cipher to white men, caravan routes and rivers were familiar to those black Africans along the western coastline who traded in their own kingdoms, and to the Arabs who had ventured deep into the interior centuries before Europeans arrived. These men were willing risk their lives . . . and thought nothing of inflicting untold suffering to secure the three commodities Africa offered in abundance: slaves, ivory, and gold.

To these Africans and Arabs, European travelers were “the devil’s children” and “enemies of the Prophet,” meddlesome interlopers who, with their idle talk of abolishing the slave trade and supplanting Arab caravans with British shipping, challenged the established order.”