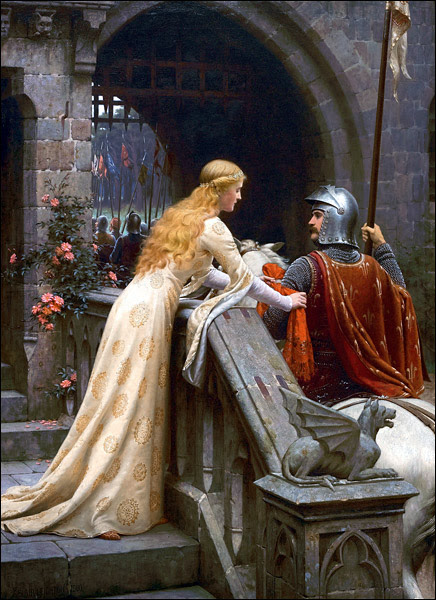 "In the scene, a knight clad in armor and ready to depart to war is leaving his beloved. She ties a red sash around his arm, which he is meant to return. This medieval custom—a superstition if you will—assured both parties that they would be reunited, alive and well. A griffin, symbol of strength and military courage, adorns the banister of the stairs that separate the couple".


Leighton was 47 when he painted God Speed, perhaps the best known of his medieval themed works. He lived until 1922.

Francis Porretto offers this, in his essay, From The “You Will Be Made To Care” Files, at Liberty's Torch:

Leyden and Teixeira might eventually regret having stated their core position... It’s time we took them at their word. We in the Right must resolve to fight as they do: a outrance. There are no longer any rules. There certainly isn’t a threshold of incivility or cruelty that anyone need respect.

Vox Popoli takes a wider view in his essay, Physiognomy is more than real, at his blog:

Regents Park Police - These items were found during a #weaponSweep near #MackworthHouse #AugustasSt during #OpSceptre. Safely disposed and taken off the streets

This is an actual police photo from a real police department in England. Not satire. Real.

Greenfield, Front Page - Political operatives have now seized privileged communications between the President of the United States and his lawyer. Despite fairy tales about a clean process, these communications will be harvested by the counterparts of Peter Strzok, who unlike him are still on the case at the FBI, some of it will appear in the Washington Post and the New York Times, and some will be passed along to other political allies. The DOJ is the bluntest weapon in the D.C. arsenal and for the first time it’s been completely unleashed to undo the results of a presidential election. When control of the DOJ and FBI matters more than elections, then voters will be irrelevant and the Praetorian of D.C. will rule.
Posted by Brock Townsend at Tuesday, April 17, 2018