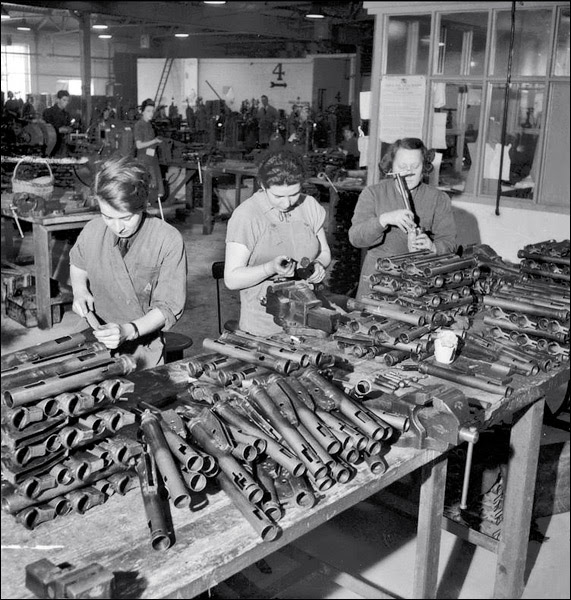 "German and Hungarian women work on the manufacture of Sten guns at an ordnance factory, somewhere in Britain".

'Tis but a gentle nudge, my friends. It's not as though we don't know what to do, what worked for centuries, and it's not as if there's a shortage of well qualified students. What are we to think when college kids can't place the Revolutionary War in the right century or find Spain on a map?
Not much of any consequence will happen until classically educated men retake the universities, dismantle the "studies" departments and chase the activists and pervs

out into moving traffic, reinstate competitive entrance exams and standards of behavior, dress, and so forth.
No sane, viable society has more than twelve percent of its youth in college. Figuring two percent as clever fakes that will drop out, it leaves ten percent to return the huge investment society has made in them.

In which author Angelo Codevilla says, "Though I voted for Trump, I’ve never been a fan of his and I am not one now. But, having taught diplomacy for many years, I would choose the Trump-Putin press conference as an exemplar of how these things should be done. Both spoke with the frankness and specificity of serious business. This performance rates an A+. Both presidents started with the basic truth. "

WWIII, Club Orlov - France and Germany—the countries that make up the core of the Western Imperium—are balking at US demands for increased defense spending, realizing that this is a waste of money pure and simple. Russia’s new defensive and offensive weapons systems have made most Western armaments obsolete and will preclude Western forces from operating in areas where these new weapons are deployed. The West is not only losing, but it is also being invaded—by mobs of migrants. Give it a few more decades, and at this rate the West will be no more, its slow-breeding population replaced by the much more fecund newcomers. They will come to resemble the more crowded parts of the third world.

Neighbors, Taki's Magazine - The left has seen to it that any cell-phone video of a neighborhood dispute with a black person will go viral, as long as the “aggressor” is white. Which leads to an uncomfortable question: Why would any white person want a black neighbor? Why would you want to live next door to someone who essentially has immunity from the rules, who cannot be criticized or asked to abide by the codes of conduct everyone’s supposed to follow? So congrats, leftists. You’re doing David Duke’s work for him. Whites have never been terribly keen on having black neighbors, but now you’ve made that choice seem practical rather than racist.
Posted by Brock Townsend at Tuesday, July 24, 2018