Walking into the shadows, walking alone
Where the sun falls through the ruined boughs of locust
Up to the president's office. . . .Hearing the voices
Whisper, Hush, it is General Lee! And strangely
Hearing my own voice say, Good morning, boys.
(Don't get up. You are early. It is long
Before the bell. You will have long to wait
On these cold steps. . . .)
The young have time to wait 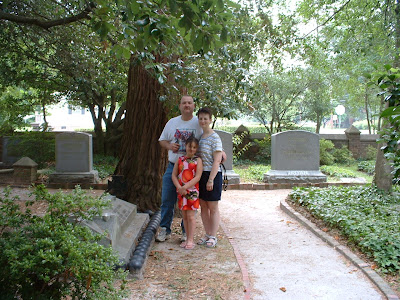 Bazz, his wife Rachel and Dixie at General Pender's grave at Calvary Episcopal church in Tarboro when they were our house guests some years ago.

The novelist Walker Percy was inescapably Southern by virtually any measure. Born May 28, 1916 in Birmingham, he lived briefly in Athens, Georgia following the death of this father, grew up in Greenville, Mississippi, and lived most of his adult life in Louisiana, in New Orleans and Covington.

Both the culture into which he was born, and the fatherly—as well as literary—influence of his older cousin William Alexander Percy, who raised him and his two brothers in Greenville following his mother’s death, helped to mold some of his fundamental views for the rest of his life. Will Percy, author of Lanterns on the Levee, was partly responsible, by both precept and example, for instilling the stoic philosophy and, relatedly, something of the southern chivalric code, neither of which Walker as an adult could ever disown.[1]