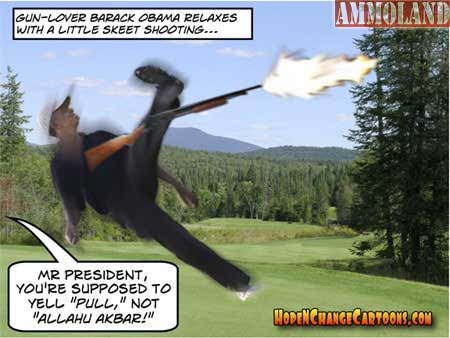 News of President Obama's apparently long-secret fondness for skeet shooting came as a surprise to those who say they have witnessed the president's "awkward" attempts at pinging the (clay) pigeons.
This has only happened with the president at Camp David, at most, a couple of times, according to a source who says he has been to the retreat on a half-dozen visits with Obama.

"The only time he shot skeet was for President's Cup," said the source, referring to a shooting competition tradition involving the presidential Marine guards. "I was there. He stayed for about five minutes, and couldn't leave fast enough."

Skeet shooting "is very hard," said the source. "Especially for someone not used to guns ... He couldn't have been more uncomfortable."