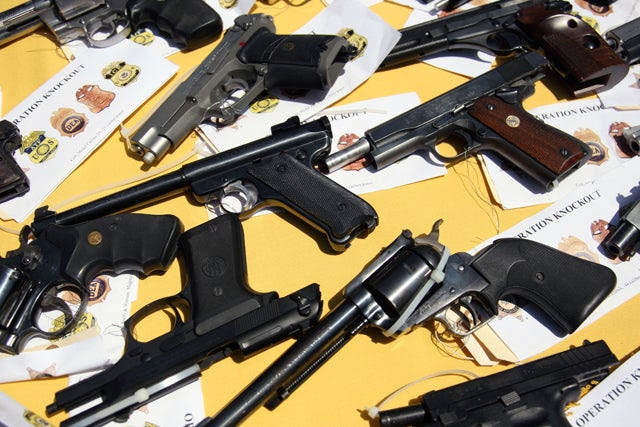 There is a lot of misinformation circulating about background checks for gun ownership.
Under the Brady Handgun Violence Prevention Act—which created the National Instant Criminal Background Check System (NICS)—all federal firearms licensees are required to conduct a background check for all firearms transactions, even if they sell the firearm at a gun show. This is to make sure that the gun isn’t being sold to a person who is prohibited from purchasing a gun under Section 922(g) or (n) of Title 18 of the United States Code, which would include convicted felons, people who have been adjudicated to be severely mentally ill, and people who have been convicted of a domestic violence offense.

President Barack Obama, Vice President Joe Biden, New York City Mayor Michael Bloomberg (I), and scores of others have repeated the mantra that approximately 40 percent of all gun purchases are conducted through private sales at gun shows and are not subject to a criminal background check. This has become known as the “gun show loophole.”

At a recent Senate hearing, Baltimore County Police Chief James Johnson went so far as to say, “Allowing 40 percent of those acquiring guns to bypass background checks is like allowing 40 percent of airline passengers to board a plane without going through airport security.”

What gun control proponents never say, though, is that this oft-repeated statistic is based on stale data that was grossly exaggerated even when it was fresh.


More @ The Foundry
Posted by Brock Townsend at Saturday, February 09, 2013