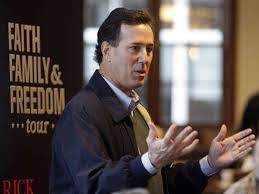 Former Sen. Rick Santorum said Monday it would be political suicide for the GOP to embrace gay marriage, and predicted the Supreme Court would not grant equality rights to same-sex couples.

“I’m sure you could go back and read stories, ‘The Republican Party’s going to change. This is the future.’ Obviously that didn’t happen,” he told The Des Moines Register.

“I think you’re going to see the same stories written now and it’s not going to happen. The Republican Party’s not going to change on this issue. In my opinion it would be suicidal if it did.”

The former Pennsylvania senator and 2012 GOP presidential candidate will be in Iowa next Monday to address the Iowa Faith & Freedom Coalition, a nonprofit group that promotes Christian principles in government. He reportedly will say that while some Republicans are now publicly backing same-sex marriage rights, the party as a whole should never support the idea.