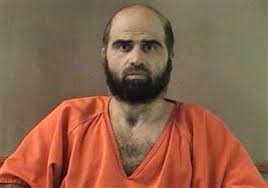 Hasan was in contact with Anwar al-Awlaki, but that doesn't make it "international terrorism." One wonders what would make it international terrorism -- maybe Hasan would have had to have displayed an al-Qaeda membership card before screaming "Allahu akbar" and opening fire. In any case, these distinctions are stupid. Hasan's act was jihad, but jihad is the one thing that our government and intelligence apparatus appears determined to ignore. "DOD: Ft. Hood Massacre Likely 'Criminal Act of Single Individual,' Not International Terror," by Ned Berkowitz for ABC News, May 23 (thanks to Block Ness):