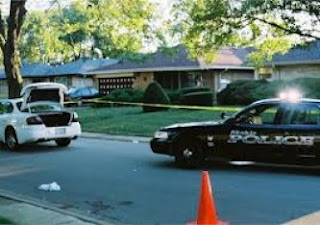 After a gun battle that changed his life, Sergeant Timothy Gramins dramatically upped the amount of ammunition he carries with him each and every day on the job. And no one tell the aspiring dictators Governor Cuomo and Mayor Bloomberg of New York: but Gramin also carries multiple high-capacity magazines.

An expert marksman, Gramins expended 43 rounds (of 47 he routinely carried), before taking down a single assailant. The murderous perp simply would not stop attacking, despite being shot 14 times with .45-cal ammo -- including six hits in supposedly fatal locations.

The most threatening encounter in Gramins’ nearly two-decade career with the Skokie (Ill.) PD north of Chicago came on a lazy August afternoon prior to his promotion to sergeant, on his first day back from a family vacation. [He heard an alert] that a male black driving a two-door white car had robbed a bank at gunpoint in another suburb 11 miles north and had fled... Unknown at the time, the suspect, a 37-year-old alleged Gangster Disciple, had vowed that he would kill a police officer if he got stopped.

...He was scarcely up to highway speed when he spotted a lone male black driver in a white Pontiac Bonneville and pulled alongside him. “He gave me ‘the Look,’ that oh-crap-there’s-the-police look, and I knew he was the guy,” Gramins said... The next thing he knew, bullets were flying. “That was four years ago,” Gramins said. “Yet it could be ten seconds ago.”

With Gramins following close behind, siren blaring and lights flashing, the Bonneville zigzagged through traffic and around corners into a quite pocket of single-family homes a few blocks from the exit. Then a few yards from where a 10-year-old boy was skateboarding on a driveway, the suspect abruptly squealed to a stop.

“He bailed out and ran headlong at me with a 9 mm Smith in his hand while I was still in my car,” Gramins said.