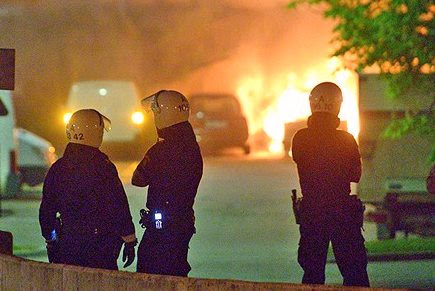 Our Norwegian correspondent The Observer has translated an article from NRK about the formation of “extreme right-wing” vigilante groups in Stockholm. The translator includes this brief note:


I don’t know whether we’re talking about neo-Nazis here, or fed-up citizens who are tired of the police not doing their job. The info in the article is taken from Swedish MSM news sites, so it could quite possibly be just ordinary citizens.

Notice that most of the arrests on Friday night were of ‘right-wing extremists’. Apparently the police had no qualms about arresting the vigilantes, but they seem incapable of stopping the stone-throwing ‘youths’. Go figure.

For the time being the Swedish intifada is continuing.

In fact, from a cynical point of view (and I tend to be a cynic), the violent culture-enrichers serve as enforcers of the existing order.