Obama knows exactly what is going on 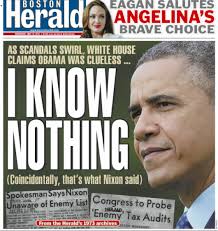 AL
VERBATIM
I saw Franklin Graham on a television program last night discussing the targeting of the Billy Graham Ministries by the I.R.S. He said that many other Christian groups had been targets of the I.R.S. as well but, refused to name them as he said it was their prerogative as to whether or not they wanted the identity of their organizations publicly revealed.

I have no doubt this is true, so we now have a government agency targeting freedom of religion along with the Department of "Justice" targeting the free speech conservative groups in America as well as those of the A.P. and Fox News.

These actions go well beyond the the norm between political parties and their differences. It has reached criminal proportions where laws have been violated. Yet, Obama clings to his usual tired, worn out defense that he knew nothing about any of this.

As the commander in chief of this nation, if he does not know what is or is not being done by his own administration then it is a government out of control. Which, I don't believe it is. Obama knows what is going on and probably ordered it.

However, if he does not know whats going on right under his own nose then he should be impeached as there is no leadership at the helm and we are adrift as a country. Personally, I think he's smarter than that and knows exactly what has been going on the whole time he's been in office and should face criminal charges to go with his impeachment.