Public Education and the Spirit of Christianity 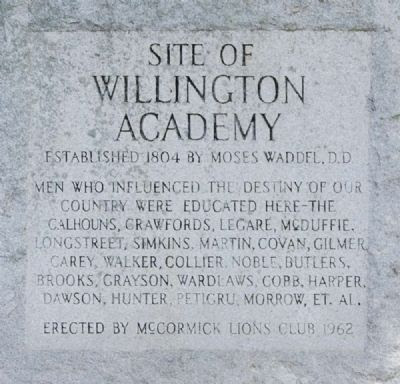 Moses Waddel’s school at Lillington, South Carolina “was a simple frontier academy of the period which taught grammar, syntax, antiques of Greece and Rome, geography of the ancients, Greek and Latin.  Waddel’s graduates included many governors and future statesmen to include John C. Calhoun, William H. Crawford, Hugh S. Legare, A.B. Longstreet, James L.  Petigru, George Crawford, Preston Brooks, Thomas W. Cobb, Pierce M. Butler, and George R. Gilmer.  It was later said of Waddel’s reason for taking the presidency of the University of Georgia was first to “raise the University and give it a respectability and usefulness in the State; and second, to communicate to public education the spirit of Christianity.”
Bernhard Thuersam, Chairman
North Carolina War Between the States Sesquicentennial Commission
www.ncwbts150.com
"The Official Website of the North Carolina WBTS Sesquicentennial"

Public Education and the Spirit of Christianity:

“In an article printed in the Atlantic Monthly, November, 1929, Count Hermann Keyserling expressed the belief that the South is the only section of America where a real culture can be produced. Only in this region have complete individuals lived.  Here and only here can a uniqueness, an individuality which leads to a development of complete souls, flourish.

Writing in a similar vein John Crowe Ransom, a Nashville poet, says, “The South is unique on this continent for having founded and defended a culture which was according to European principles of culture; and the European principles had better look to the South if they are to be perpetuated in this country.”

The same point of view characterizes a symposium entitled “I’ll Take My Stand, by Twelve Southerners,” which has lately been published by Harpers. In the field of education these thinkers criticize our public schools, and desire a return to the ante-bellum system of formal training. Indeed, a great glorification of the academy, which was the most characteristic school of the pre-war South, is presented. With the lapse of the educational system of the Colonial Period…

“the South found a means of transmitting to its own people the essential of a good classical education, by the growth of an institution that never, to the same degree, affected the North. This institution was the academy.  It was by its means and operation that the older Southern life and culture became what it was, and remained until the catastrophe of 1861-5…..The academies solved the problem of the gap between the mere acquisition of mere knowledge and the “acquisition of power for independent work” by putting the pupils into direct contact, not with undisputed masses of information and up-to-date apparatus, but with such teachers as could be found.

Their object was to teach nothing that the teacher himself had not mastered, and could not convey to his pupils. Their training was therefore classical and humanistic, rather than scientific and technical – as most of the available teachers were products of the older European and American schools.”

In America the academy was a “product of the frontier period of national development and the laisse faire theory of government.” Frequently it was motivated by “denominational interest and sectarian pride.”  In the South the academies were of two types, the modest local institution which was sometimes called the “old field school,” and the more pretentious, more permanent school with a wider patronage. While fees were commonly charged, the academies were democratic in character, and usually the idea of individual development was dominant. Generally speaking the schools served the educational needs of the entire community.”