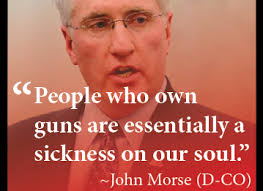 According to Garcia–”Personnel working for BFDF to help collect signatures for Senator Morse’s recall were the subject of known erroneous radio attack ads for the Morse political machine headed by Ed Hall, Chairman of the Denver Democrats and the filing agent for a recently established Morse anti-recall group called “A Whole Lot of People for John Morse.”

Hall is known for referring to Colorado’s second-largest city, Colorado Springs, as a “…right-wing, religious whack-job stronghold.” on his Democratic Party website biography.*

Thousands of concerned and outraged Colorado registered voters in Morse’s district have already signed petitions to get the recall of Morse on the next ballot. BFDF staffers expect to gather far more signatures for Morse’s recall than are necessary.