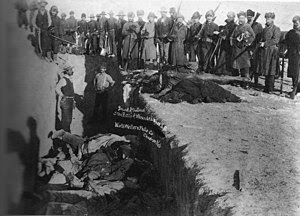 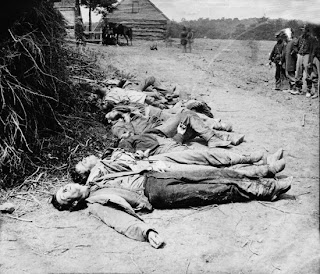 This type of mass genocide better known as terrorism or just premeditated murder, was official policy of the U.S. Army at the time because they had practiced it for years against the South, without any consequence or accountability.  It was officially sanctioned by Lincoln, and Sherman even wrote about it saying that the civilians in the South would have to be eliminated so that it could be repopulated by their people. So naturally it was easy to transfer the policy of genocide to the Indians, again justifying it by saying that they, like southerners, weren't worthy of life because they resisted tyranny. Of course the Indians' crime like the south, was simply wanting to be left alone and not have everything they lived for stolen from them, something the Yankee brain just will not tolerate. As a matter of fact many of the same Union officers such as Sheridan and Custer were eager to again pick up the bloody sword to gain promotion, glory or whatever was in their twisted minds.
It's basically the same policy that's been used by mass murderers throughout history - dehumanize a class or culture or race of people, paint them as revolutionaries, savages, backwards, danger to authority, whatever suits the political correctness of the times.  Then it's easier to murder them. Of course it's a whole lot easier when they're unarmed, and especially civilians (women and children).  Yes, the same thing that happened at Wounded Knee happened in the South. It's factual and it's documented.  We should never forget that the United States military was the executioner both times, because we are probably closer to it happening again than ever since Wounded Knee.
Roy
Posted by Brock Townsend at Thursday, May 02, 2013