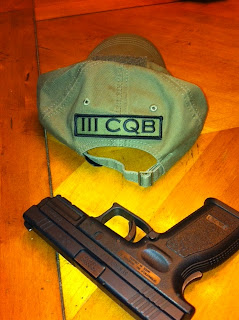 We trained over the weekend at the Citadel PatCom, but as former students who were present know, it was not a typical set of classes.  Holly and I had (and still have) many people to meet locally, tasks to accomplish before our next loop of this beautiful country begins.  As a result, we got started late on Saturday for Fight to your Weapon, and there were breaks forced by events.  The breaks were good things - you know, like Patriots riding around the mountain and buying property.  That is called progress.  That is called building Tribe.  That is called morale and cohesion.  That is called the premise of "The Citadel".  Even without walls we are building a community of Americans who believe in Rightful Liberty, who are choosing to pioneer this modern road back to Independence and Liberty, who are choosing their neighbors, and with whom they will stand.

So you can see, I had ZERO problem with the breaks and the chaotic nature of our Saturday class.  We finished up as the last bits of daylight surrendered to the night.  Then we headed to the fire to talk.

Sunday was more of the same.  Our GroundFighting 101 module is only a few hours, and it is far more physically demanding than Fight to your Weapon.  But we arrived atop the mountain later than we had planned, then Jim took several people down the hill to fire his beautiful 1911 and ARs (Oh, the horrors!!  ;)  sadly, and seriously, two people who had signed up for the GroundFighting course had to leave before the class began, because they had to get on the road and our "schedule" was shot to heck (Hey, that's a funny! Shot...)  Both Patriots refused when I told them I'd hit the refund button at PayPal for their Sunday fee - we parted with the understanding they will join us for a class at some point in the future.

As all of my students know (though I am only making it public now), you only pay for my courses one time.